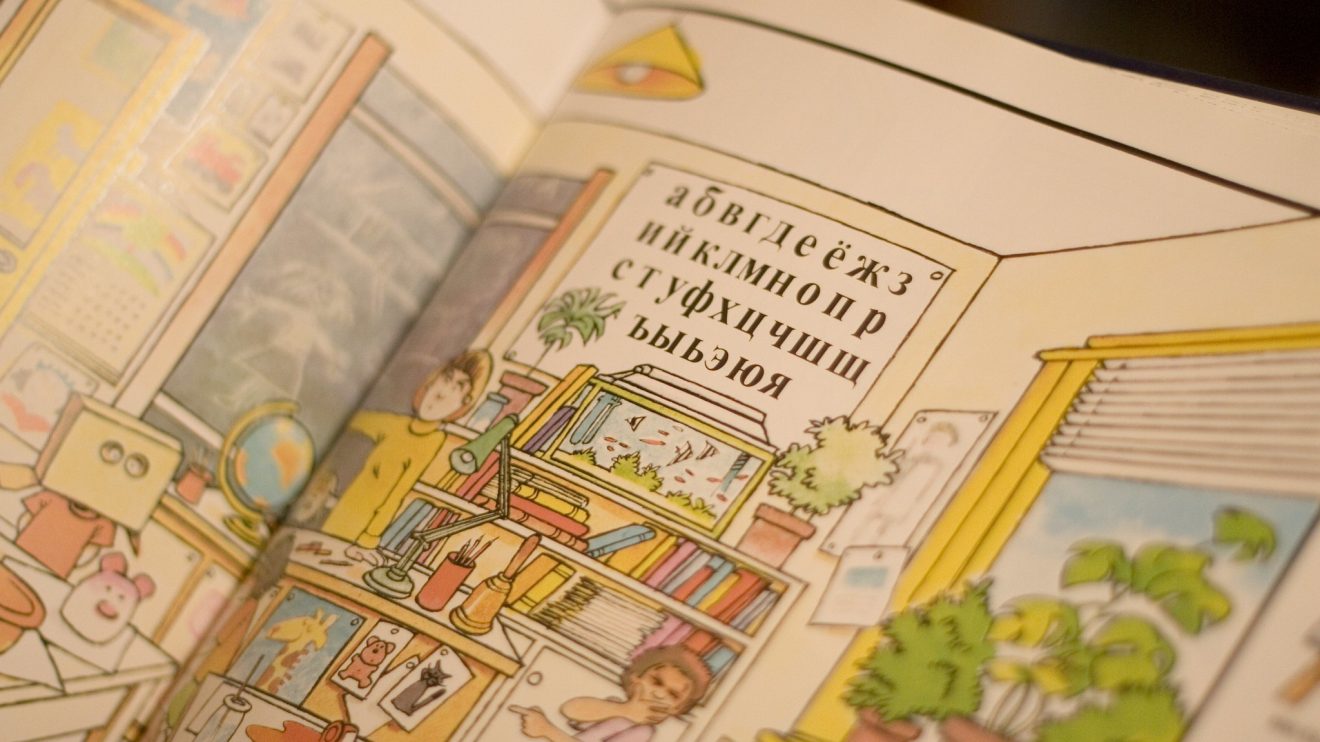 Some of these letters can seem to be familiar to English-speakers.
So, there are

yes, these letters are combined into words atom and cat in Russian (superpower cat  )

(an) attack and comet

to memorize it you just need to pronounce words containing these letters and to write it by hand several times, repeating and writing, write it in a big size and in different size of letters, make your special letter style, coloring and painting.

Б is like English B it seems to look like a canopy to a street shop, maybe bookstore with a good bibliotheca

Л is stronger than L it reminds a bit a lean-to a roof, shelter
П it is like part of a port or passage

Д is a house, actually, house in Russian is called дом

З this letter is almost Э or the figure 3 in writing, so let’s imagine when you dial a number on your phone, every time you type the figure 3 you hear resonant sound “Zz-zz-z”

Э is like English A for example in apple divided apple

У it is a vowel sound, like in the word soon

Ы this sound is quite unusual, it requires practice, not hits to the stomach

Ч is contains the figure 4

Ш is happen when the letter E is fall into sleep, sniffing with “Sh-sh-sh”

Щwhen the letter Ш has a tail

Ж for me it looks like a giant bug, flying with a big noise

Й this sound is like in words toy, yo-yo

Я this letter also a personal pronoun I in Russian like sounds Й+А pronounced smoothly, linked and fast

That makes all the difference.

you may repeat the words above with memrise http://www.memrise.com/course/934987/russian-alphabet-35/

A bit more about pronunciation and reading

Start with training pronunciation of sounds that resemble the sounds in English and after this do works with new sounds.

Here are some good resources for practicing Russian pronunciation
http://www.russianforeveryone.com/Rufe/Lessons/Course1/Introduction/IntrUnit1/IntrUnit1.htm

https://www.youtube.com/playlist?list=PLTg5fEXojXbrhjL8iKqAobmAplSaQjhHr
you may choose subtitles.

To train the sound [Ы] pronounce the sound [У] and the gently stretch your lips and smile :) your tongue shouldn’ t move.

The sound [Л] is harder than in English “small ball-lollipop falls”.
Train this hard consonant with syllables ал, ол, ел, ул and then ла, ло, лу, ле. You can even try to sing it 

Well done!
That’s all for now!
Do you know that after reading this article you actually know 40 words in Russian?

Should one Rush into Russian?