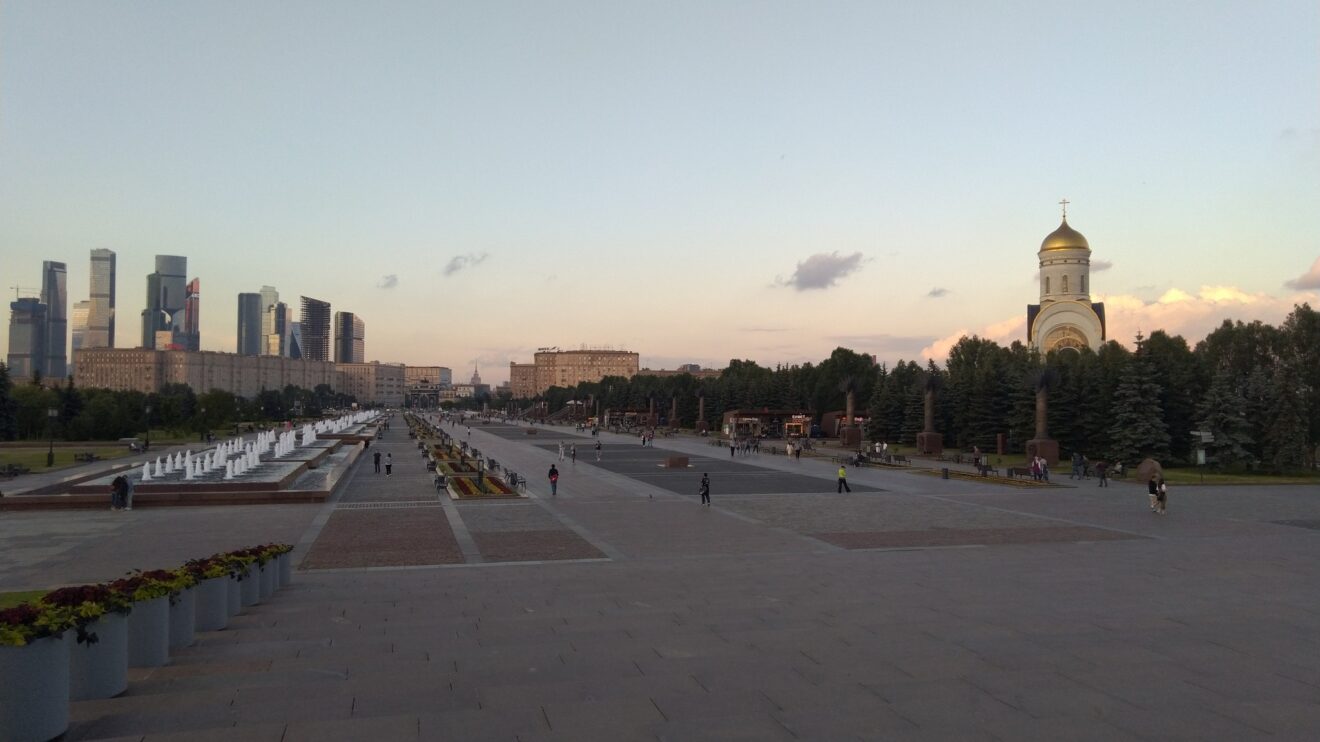 The Russian language is a global language, and one of the UN’s official languages, not limited to Russia’s boundaries at all. It is used in space (the first language in space, actually), in Antarctica, on the Internet. Well, almost everywhere, though not as widespread as English.

Russian lends its vocabulary to other languages. Global languages, like English, accept geological and paleontological, historical and political terms, names for newly discovered animals and chemical elements, not to mention exonyms, like troika, czar, balalaika, dacha, samovar. Of course, there are a lot more words taken from English into Russian than vice versa. But English is not the only language in the world. Kyrgyz and Finnish, Turkmen and Latvian, not to mention minor languages found in Russia itself are full of somehow changed Russian words.

Russian is the language of great writers: Pushkin and Lermontov, Tolstoy and Dostoyevsky, Chekhov and Gogol, Pasternak and Nabokov… Another famous writer, Ivan Turgenev called the Russian language “Great, powerful, truthful and free”. And it’s true. Russian does open new doors for everyone who takes the challenge to study it. And no, Turgenev’s quote is not arrogant; he didn’t say “the most,” so it’s even pretty modest.

One thing that keeps many people away from studying Russian is the Cyrillic script, or the Russian alphabet. But there’s nothing to be scared of.

There are different methods of learning the letters and sounds of the Russian alphabet. For example, the one right here, on LHLIB.RU.

Also you can try using Cyrillic for writing words and names from your culture that you know very well.

Look at this chant. It will help you remember the way Russian letters LOOK.

Б – lowercase b with a roof

В – capital B which is not B

Д – shed with a window

Й – and once again

Ф – O with a stick inside from up to down

Ъ – lowercase b with a roof to the back

Э – round and reversed letter E

Ю – cufflink or 10 with a belt between

They are Russian letters as they are!

Russian grammar will keep you awake

Not only does Russian cursive make you cry, but also Russian grammar keeps you awake.

Russian inflectional morphology includes 6 cases (for a few words there are more), 3 genders, 3 persons, 2 numbers, 3 tenses and a lot of forms for every word (except for a few loan words ).

Yes, there are charts with rows and columns filled from top to bottom. But I swear, as soon as you start learning all those charts, you’ll find some cells in those charts EMPTY, because that very form of the word is impossible.

Let’s take a look at those gaps!

Russian is full of verbs. Often English adjectives can be translated into Russian with verbs:

Unlike in English, where one noun before another one can potentially have the function of an adjective, in Russian an adjective has to be made with certain endings and less certain suffixes.

Some words of foreign origin, like фейхоа, киви, don’t have adjectives and have to be used as nouns only. ( Many Russians think it’s because they’re foreign and relatively new, but that’s not the true reason, for there are many more exotic fruits which can get their adjectives easily: банановый, джекфрутовый.) The Russian language didn’t use to have such words before and therefore had no rule for that. The typical final letter in native​ neutral gender words used to be just O and E.

There is a stranger thing. While adjectives from most week days exist and feel good, the ones from “Wednesday” and “Thursday” don’t.

When you talk about yourself in the future, for example, you promise to win a game or to beat an opponent and you’re about to use the word победить, you soon find that all imaginable forms such as победю, побежу, побеждю are not acceptable in the modern standard Russian. They are considered illiterate, and the correct form simply doesn’t exist. Well, of course you can use synonyms like “выиграю, одолею, сокрушу,” but they’re the words derived from other roots. There’s only an nonce word, напобеждаюсь, which literally means “I will enjoy my series of victories” , and as you know is never really used by anyone.

But, hey, победить is not the only verb like this. The next one for you to meet will probably be убедить. And still, that’s not the end.

The fashion of using or not using feminitives is a real trap in Russian. Russian does have genders and many words can be changed from male to female. But the rules are not as strict as, say, in Lithuanian, which has a male-female equivalent for every living thing.

The problem is the same as we have with “difficult” adjectives. The ending for a femitive is absolutely clear It’s <–a> or <-я>. But suffixes spoil everything, there are –ев – , -есс-, -их-,-ш-, -ин-, -иц-, -ичк-, -к-… Even worse, some of them have negative connotations. For example, ​генера­льша means “a wife of a general ”​ inste­ad of “a general ”. To make it even more complicated, Russians disagree with each other about those connotations, and there are diverse opinions whether a certain suffix ( e.g. -ш- ) is derogative or not at all.

The situation with animals is a little better. Most animals have their male-female pairing. But still there are a lot of missing words, because the universal rule doesn’t exist. There is a male polar fox «песец», but looking for a female will lead you straight to the “there’s no such word” position. Don’t even try. There is a female dragonfly (стрекоза). Looking for a male dragonfly may lead you to the word “стрекозёл” which exists only in jokes; in dictionaries, once again, there’s no such thing.

Even though there are many nouns made from verbs, they are not gerunds, because there are no gerunds in Russian. Some of these nouns sound a little like gerunds, but this grammatic form can’t be made from every verb.

When you translate English gerunds into Russian, you may use nouns, infinitives, extra subjects and extra words like “that, how, the way, in order to”. The gerund “being” is especially difficult to translate into Russian.

Many “nouns from verbs” are formed by adding –ние/ -ё.

Speaking of “day dream,” there is the word мечта. Being singular it has all 6 cases. As soon as you use the plural “мечты”, you’ll find an empty cell in” Gen – pl”. There is no word “мечт”. There is the word “мечтаний”, but the meaning of this word is closer to a process than to a common noun.

Is the word “мечта” the only one of this kind? Of course not!

Most verbs have adverbial participles, but, of course, a certain number of verbs don’t. Аnd those verbs are not rare. The reason is that they don’t sound very pleasant with those consonant-vowel combinations.

If you want to say either “I sang while writing” or “I wrote while singing” you will inevitably have to rephrase your sentences, for both поя and пиша aren’t welcome in Russian.

Well, there is a way out: you need to add some prefixes and make words like напевая, записывая.

It’s difficult to say “while sleeping”; definitely not “спя”.

Russian has verbs for the first three (выглядит, звучит, пахнет), but surprisingly, there are no verbs for the other two, and we have to use preposition-noun phrases, such as на вкус / на ощупь. How come?

The Russian words we should have in English

There are some special Russian words that can’t be translated into English literally. These words are not related to the national philosophy or any cultural features strictly Russian.

Сутки — a unit of time that equals 24 hours within one date.

routine life of a person or the whole nation.

enough time after doing it.

Полтора— one word to say “one and a half”

Опаздывать—the fact of coming late or taking long seen as an activity, where late is not an adverb of

time but the action itself.

Болеть—to be ill seen as activity

Дружить— the act of being friends or getting on well with someone.

Нельзя — one word to say either “forbidden” or ”impossible” or “unacceptable .

The things the Russian Language does without

Learning Russian is not only difficult, but also simple.

The Russian language has no articles. At all. There words “one” or “this”, but they’re not articles and they don’t have to stand before nouns.

So Russian speakers have no idea about articles before they start studying foreign languages.

The Russian language does have possessive adjectives and uses them with or without nouns. But special possessive pronouns don’t exist.

To be verbs in the Present (am/is/are)

The Russian speakers never forget to use “to be verbs” in the past. But the same words in the present seem to be completely redundant. Even the word “есть” which is supposed to mean “is” is often used in the other meanings like “there is/are”, “to have” and even “eat”. The other present to be verbs like есмь (am), еси, суть (are) are completely archaic. So, Russian speakers haven’t used the present to be verbs in their everyday speech for many generations now.

Now, you see why the gerund “being” is difficult to understand if your first language is Russian. It includes two missing parts of the language!

In the phrase “She is a doctor” only the first and the last words make any sense for Russian speakers, the ones in the middle-don’t.

Substitute One and Ones

Russian speakers use the word “one” as a numeral, but not as a substitute for a noun. If an adjective comes before the substitute “one”, in Russian it’s usually left alone. In case of prepositions and clauses like “ the one with a tail”, “the one I love,” Russian speakers have to use words like “that/which/who”. Well, for “ones with adjectives” “that/which/who” are also used.

Questions and negatives are made without any auxiliary verbs.

Answers include main verbs of sentences.

Having no auxiliary verbs in their own language, Russian speakers often mix up “to do” and “to be” verbs; they look equally redundant to them. It takes a lot of time before they are able to identify if part of the predicate is a verb or not.

Sentences in Russian may not have subjects or verbs, but they are still sentences. The word order is much freer than in English and has just a few obvious restrictions.

No wonder Russian speakers may omit subjects, verbs, objects and start sentences with places, times, objects or… whatever. Or misuse “it”.

Using complex objects is also complex! Inevitably, Russian uses the past tense instead of infinitives!

Russian speakers use only three tenses and just a couple of aspects, e.g. “perfective,” which shouldn’t be confused with “perfect” for there is no perfect aspect in Russian; it is initially beyond their understanding.

Continuous aspect can also be difficult, Russian speakers may remember about –ing forms but may forget about ‘to be ‘verbs or use ‘to be’ verbs along with main base forms in the same sentences, making phrases such as “I am go ” or ”I going”.

This word is extremely difficult to translate with one word.

Well, go ahead, say the word “Поехали!” (off we go ), the first word outside the planet which was pronounced in Russian.

Strict rules, empty cells and new concepts will definitely let you see more of this life.

Issues for Speakers of Slavic Languages

Should one Rush into Russian?